Go Directly To Rewards
Welcome to the PledgeManager for GAME THEORY IN THE AGE OF CHAOS: 2017-2020 Omnibus Edition!
If you missed our campaign, don't dismay! Just choose an option below.

Hi, it's Mike Selinker. I'm a tabletop game designer you may know from games and books like the Pathfinder Adventure Card Game, Betrayal at House on the Hill, The Maze of Games, Apocrypha, and Lords of Vegas. Once the latter game was off to the printer, I went part time at Lone Shark for a few months to try to do something positive in the last months of this election cycle.

So I wrote, edited, and designed a massive new edition of my essay book Game Theory in the Age of Chaos, alongside my mathematician co-author Rich Malena-Webber. It's a strategy guide on how to fight fascism. My team and I are raising funds to print the book here on Kickstarter. We're doing this because game theory suggests this is our last chance to save America.

Game Theory in the Age of Chaos is a 532-page book of 65 essays about game theory and politics. Every day since Donald Trump got elected, I've fought the urge to scream at the internet. Instead, I channeled that howling into a series of essays showing how game theory explains and justifies the behavior of all the actors in the system: Trump, the Democrats, the Republicans, the Supreme Court, and most of all, people like us. By taking a deep breath, remaining level-headed, and letting my grasp of game science do its work, I've connected with my readers on Medium, and had my essays shared all over the world. Alongside my Basket of Adorables colleague Gaby Weidling, we made a small edition of some of those essays a couple years ago, supported by scholarly essays by Rich, who teaches game theory to raise funds for Democrats. We also sent copies to every Democratic Senator and Congressperson, with your help.

Now, as we count down the last weeks of this election, I've compiled a massive new omnibus edition, with forty new essays by me and supporting pieces from Rich, plus an all-new foreword from game enthusiast and Washington senator Steve Hobbs. It's quite the book, I think.

As with our last campaign like this, we're also giving U.S. backers the option to send a copy to every Democratic member of the incoming Congress. If you're feeling particularly generous, you can get the book sent to ten Congresspeople. Based on the letters we got from them, some of them actually read it and applied its tactics to help beat back the autocrats and restore democracy in America. If you select that option, we'll cover the shipping to a Congress member. Because we don't actually know who these members will be, we're going to do this in one batch, rather than have individual backers select Congresspeople. We'll also send them a note which has your name on it (if you want).

The book is done. We sent it to the printer last week. They're putting the finishing touches on it now. In fact, you can read all of it right now, because it's right here. Go ahead, flip through it. If you like it, get yourself a copy.

Here are some of the essays in the book.

Here's the size of the book itself. It's solid.

Some of these essays are pretty heavy, it's true. For me, it helps to crank up the volume on my favorite thematically appropriate tunes. So, I've assembled some of these songs, with the artists' kind permission. Because they want to fight fascism too. Each book comes with a digital copy of the album Music to Doomscroll By.

And maybe more when we get done with it. It's music for your brain and your tapping toes. The music comes with the PDF of every copy of the book. Free.

Here's a slice from Meg, whose music you can also hear in our Kickstarter video above.

The Ghastlytrump Tinies is an alphabet primer of all the things we stood to lose in a Trump administration. From "A is for Arctic, drilled by wells so tall" to "Z is for Zeitgeist, cuz it's the apocalypse," we got our favorite artists and cartoonists—John Kovalic, David Malki!, Satine Phoenix, Heather Hudson, Kris Straub, Lar deSousa, Nate Taylor, and so many others—to illustrate one of the impending disasters as seen by a child. Over the last four years, it's become a tragic checklist, as the Trump administration has found a way to ruin just about everything good.

It's a poignant, funny, troubling work. I encourage you to watch the Doubleclicks' audiobook below.

Lone Shark's games are played by people of every political and social background, and we're thankful for that. But we're people too, and we all agree that trampling human rights and undermining democracy are bad things. We've never been shy of saying to people "This is what we think" as loudly as possible. Through our charity and social work, we've championed the rights of marginalized people since we started this company 18 years ago. In 2016, when we wanted to do more overtly political work, Gaby and I made a side group called Basket of Adorables. As Lone Shark's personnel decided they wanted to be a part of those efforts, we decided to fold that into our company. Everybody knows our opinions. If they're gonna hate on us for expressing them, we don't want them as customers anyway.

We're all game and puzzle creators, but trust us, you don't have to tell us to "stick to game design." Honestly, we'd much rather be sticking to game design. But desperate times call for desperate measures, and so we're devoting our free time to helping restore the rule of democracy in America. Most of us contribute our time, writing, and illustration out of the hope that we'll have a positive effect on the national dialogue.

I'm thrilled to be joined, as usual, by Richard Malena-Webber an academic, puzzle and game designer, and presenter. He's designed puzzles for everything from the launch of the Tomb Raider movie to live interactive crime-solving mysteries. Rich created and hosts Atomic Game Theory, a video series devoted to game analysis, and he created the Puzzle Keyring, an educational decryption tool for codes and ciphers. His recent project was a D&D summer camp for kids that was wildly successful.

As usual, I'm helped here by editors Gaby Weidling and F. Wesley Schneider, cover designer Liz Spain and Skylar Woodies, artists John Kovalic and Pat Race, and store and website manager Shane Steed. Plus everyone at Lone Shark. I appreciate their help, and of course yours as well. Thanks for helping restore democracy in America. 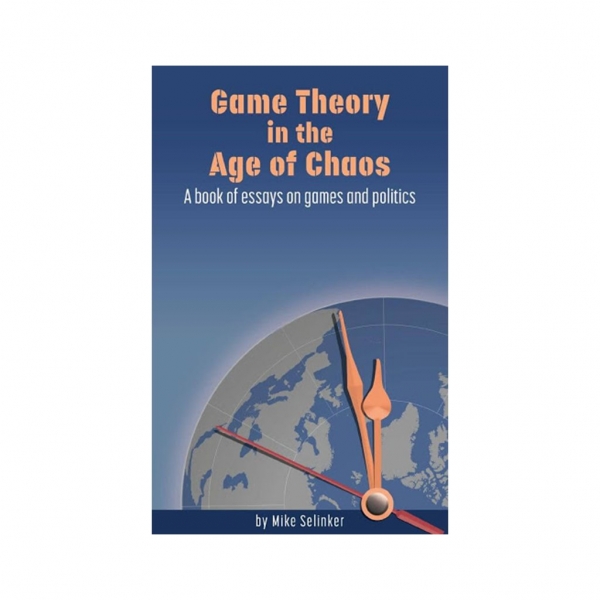 A BOOK FOR YOU

A copy of Game Theory in the Age of Chaos sent to you. 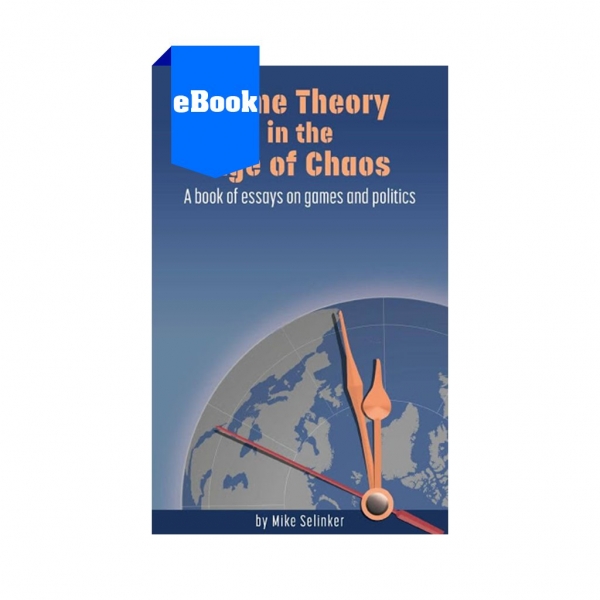 AN EBOOK FOR YOU

The digital versions of Game Theory in the Age of Chaos, in PDF, .epub., and .mobi form. 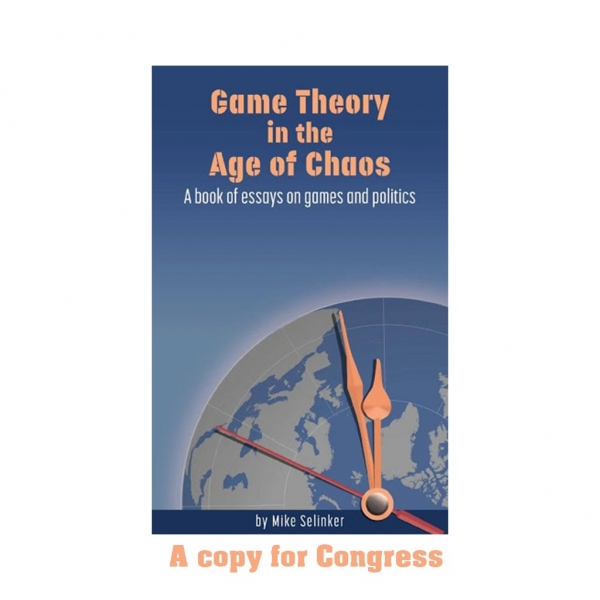 BOOKS FOR YOU AND A CONGRESSPERSON

A copy of Game Theory in the Age of Chaos sent to you and a copy sent to a Democratic or Independent Senator or Representative in the new Congress. U.S. residents only.

Available in the United States only. 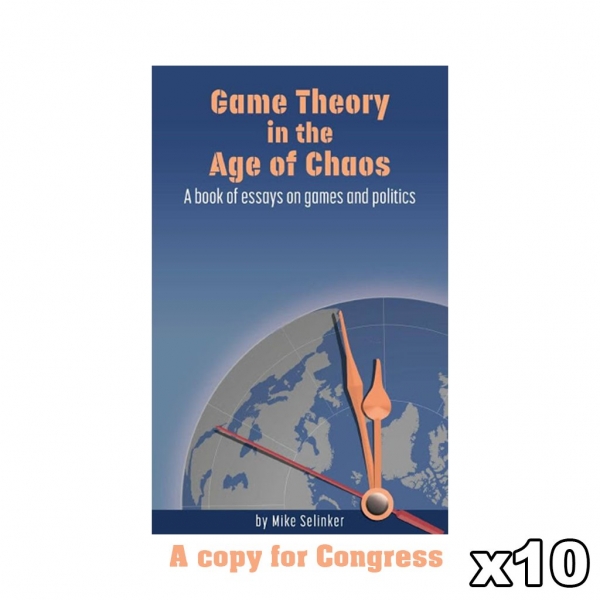 BOOKS FOR YOU AND TEN CONGRESSPEOPLE

A copy of Game Theory in the Age of Chaos sent to you and copies sent to ten Democratic and Independent Senators and Representatives in the new Congress. U.S. residents only.

Available in the United States only.

One last step to go!

Share your email, we will send you an invite!

If you're already have a PledgeManager account from another project, just sign in using the button below to join the project.

Complete your information below and we will send you an email to get started!